I’ve got a cool story to tell. No, it wasn’t the Google calling to buy us out. It was early this year and I was feeling great about all we’ve got lined up for 2012 at Formsite. I was in my office answering email and listening to music. Since I have a private office, I often work with my music turned up pretty loud. I was listening to “Party Rock Anthem” by LMFAO when the phone rang. My kids love the song “Party Rock” and it was one of my “money” songs that helped push me through finishing Chicago Marathon in 2011. I would say it was probably my favorite song at the time my phone was ringing.

I go to pick up the ringing phone and I accidentally drop my phone headset. Scrambling to pick up the headset and get it adjusted, I don’t have time to hit the mute button on my music. I answer the phone “Hello this is Randy” while “Party Rock” is blaring in the background. I hit the mute button and the guy on the other end of the phone says, “This is RedFoo from LMFAO.” 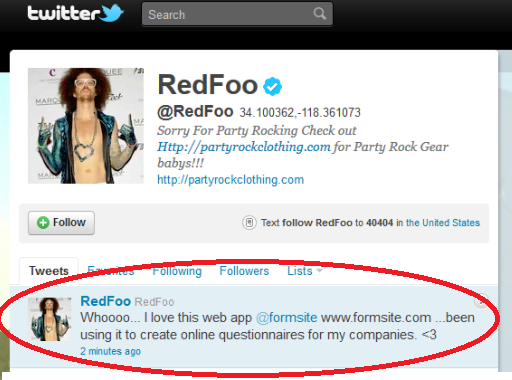 I think to myself, “yeah, yeah, right. This guy must be extremely quick witted.” We get to talking and he is talking about how he is using Formsite for his different businesses. The guy I am talking to is 100% business. I’m thinking to myself, this might actually be RedFoo. After about 5 minutes, I stop the conversation and I say, “You really are RedFoo from LMFAO?” He says, “yeah, yeah” and we continue our business conversation.

You would think a conversation with RedFoo would be about bottles and models, but we were talking web security, venture capital and music apps. Anyway, as the conversation closed, I was still not 100% sure it was RedFoo as my friends have pulled off some pretty good jokes on me in the past. I ask RedFoo to send a tweet to his 250k followers. RedFoo agreed to tweet as an experiment to see what kind of traffic spike Formsite would get from his followers. RedFoo tweeted right after we hung up and we saw a nice traffic spike on both Formsite and our Twitter account. Thanks RedFoo!